Won't Let You Down 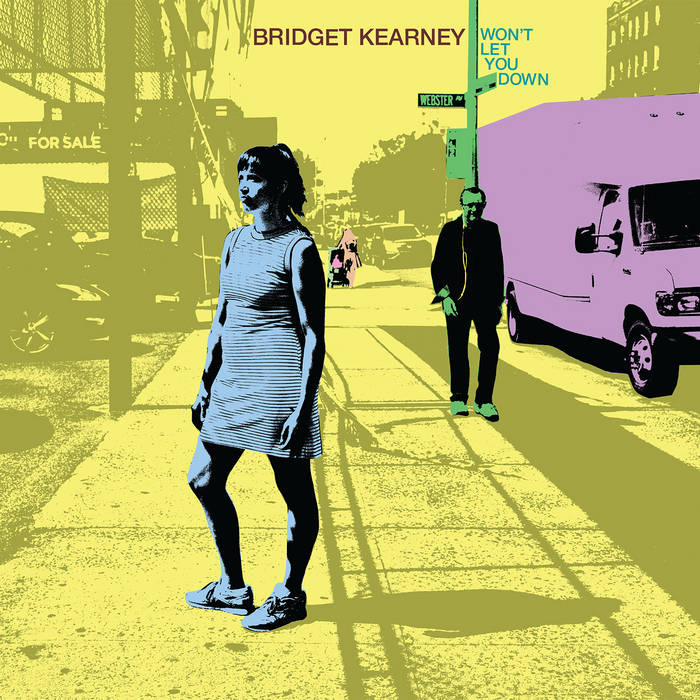 In the 12 years she has toured the world as a member of the soul-pop sensation Lake Street Dive, Bridget Kearney has gotten good at a lot of things: adjusting to jet lag, sleeping in moving vehicles, hauling her acoustic bass up and down stairs, keeping her cool in front of cameras, thousands of people and personal heroes. But the skill she has honed most obsessively is songwriting. “For me it's the best part of music,” says Kearney. “That's the best feeling: after those few hours that you spend working on the song, and you have this thing that you've made, and you’re like, ‘Wow. This didn’t exist before. I’m so excited about what just happened.’" Now, at long last, Kearney steps into the spotlight with her first solo effort, a wry, big-hearted pop album entitled Won’t Let You Down. The record, like its title, promises not to disappoint.

Kearney grew up in Iowa City and went to college in Boston, where she double-majored in jazz bass at the New England Conservatory of Music and English at Tufts University. While still a student, she won the grand prize in the John Lennon Songwriting Contest, a harbinger of things to come. It was during this time, too, that Kearney and three of her fellow conservatory students founded Lake Street Dive. But Kearney has always been voraciously collaborative, dabbling in chamber pop with the Brooklyn group Cuddle Magic, bluegrass with the now-defunct Boston outfit Joy Kills Sorrow, and Ghanian music as part of a duo with fellow songwriter Benjamin Lazar Davis.

The recording process for Won’t Let You Down began when drummer/engineer/producer Robin MacMillan invited Kearney to record a few songs at his Brooklyn studio. The sessions, which took place over the course of three years, were leisurely and experimental, free of a label-imposed deadline or a rental fee. “The answer to everything was 'Yes. Let's try it,'" Kearney remembers.

"One of the things I like about Robin as a producer is he seems to be able to disassociate an instrument with its stylistic history and just kind of hear it for the sound it's creating,” says Kearney, who played electric bass, piano, synthesizers, organ, electric guitar and acoustic guitar on Won’t Let You Down. The album abounds with peculiar noises: an unidentifiable yelp, something distinctly kazoo-like, the distant whistle of a steaming kettle. Shades of The Beatles, Wilco, Fleetwood Mac and even Nick Cave can be detected, as the album swerves from ‘60s pop to ‘80s soft rock to Gothic Americana.

Won’t Let You Down is the first project in which Kearney has appeared as the primary vocalist. “I've always had this affinity for singers and songs that are kind of vulnerable-sounding and flawed,” she says. “I'm not a trained singer or a really powerful singer, so that's something that you can kind of use as an advantage in your writing. You can say some things that are vulnerable and personal, and I think it can come across more powerfully with a voice that's imperfect.”

Kearney’s lyrical talent stems from her ability to unlock the profundity in details both small and strange. She jokingly describes the song “Daniel” as being “about when you have a sexy dream about someone, and how weird that is.” But in Kearney’s hands the concept transforms into something at once aching and exquisite, an earnest pop concoction with a conflicted soul.

Tasked with naming her favorite song, Kearney chooses “Wash Up,” a dreamy soft rock jam about running into an old lover. “It's one of my favorite kinds of songs,” she says. “These crying on-the-dance-floor kinds of things, where the track is kind of bumpin’, but when you listen to the lyrics you realize it's actually a sad song.” “Wash Up” is classic Kearney: a light touch undergirded by dark self-awareness, and endlessly hummable.

On Won’t Let You Down, buoyancy is always tempered by melancholy. But just as often, wistfulness is undercut by a twinkle in the eye. It’s “this cross section of sadness and humor,” says Kearney. “When you're getting over crying, and you just start to laugh.”

In the 12 years she has toured as a member of Lake Street Dive, Kearney has fine-tuned many things-collaborating, acclaimed bass playing, and harmonizing to name a few. But the skill she has honed best is songwriting. Now, Kearney steps into the spotlight with her first solo effort, a wry, big-hearted pop album called Won’t Let You Down. The record, like its title, promises not to disappoint. ... more

Bandcamp Daily  your guide to the world of Bandcamp

Guest hosted by Tamar Osbourn aka Collocutor and Toshio Matsuura.